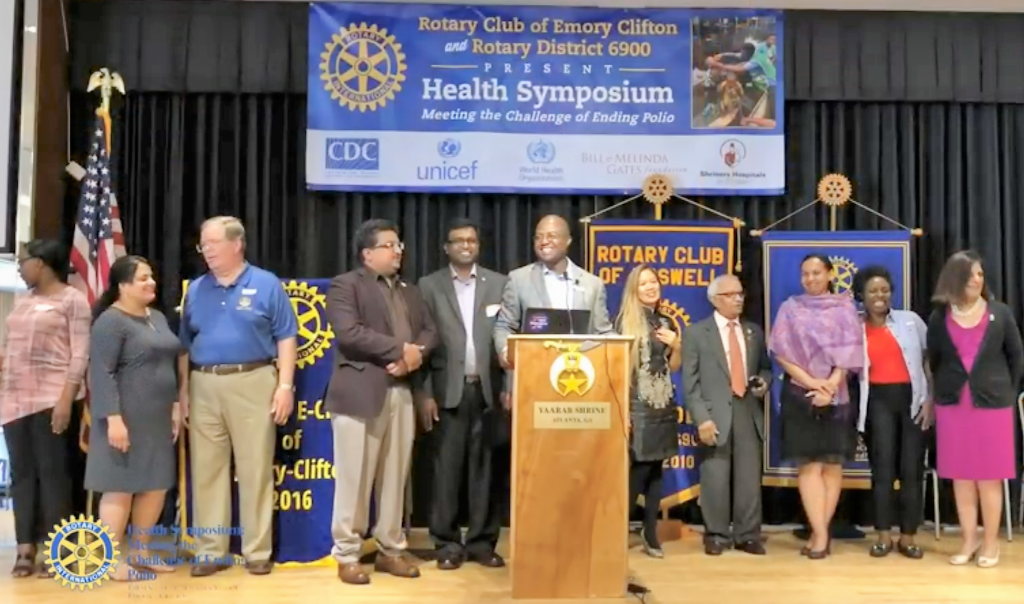 “When we think of polio, we often focus on the numbers and statistics of the disease often forgetting that behind each number is a human being – usually a child and polio will affect them for a lifetime.” (Dr. Gulshan Harjee at the Symposium)

Meeting the Challenge of Ending Polio was the theme of this year’s Second Annual Health Symposium sponsored by the Rotary Club of Emory-Clifton that was held on Saturday, August 3, 2019 at the Yaraab Shriner’s auditorium in Atlanta. The symposium featured presentations on the lifetime challenges of polio, an update on current polio eradication efforts, and the latest information on an emerging disease called “the new polio.” This globally webcast program is currently available for viewing on YouTube at (https://youtu.be/yem7K5Hkw3g). District Governor Jim Squire graced the occasion and spoke on behalf of the District 6900.

Polio survivors Mohammed ´Inam” Inamullah and Hawa Bello presented enthralling personal stories of overcoming the personal challenges of polio. Inam contracted polio in Pakistan as an infant and as a result being his right leg is shorter than the left leg. At age 7, Inam tried out for his school’s soccer team but was ridiculed by the other boys because of his polio deformity. Devastated, Inam left the tryouts in tears only to be comforted by his art teacher Miss Nasreen who explained that everyone has been given a special gift from God and he should focus on developing that gift. Inam took this advice to heart and today is listed as one of the top 30 artists in the United States by Art Business News. His work has been featured on the Global Polo Eradication Initiative (GPEI) website and is internationally known. At age 3, Hawa Bello contracted polio and was unable to move any part of her body. Resources to treat polio were limited in the Central African Republic (CAR) and Hawa lost the ability to walk. The situation became even worse when war broke out in CAR with Hawa spending 10 years in a refugee camp prior to coming to the United States. Overcoming both physical disabilities and bullying, Hawa went on to graduate from high school and now has started college at Georgia State University (GSU) with hopes of becoming a pharmacist. Hawa is also the recipient of the Dr. Gulshan Harjee Scholarship for her college education. Hawa continues to work daily to overcome her lack of mobility in the urban setting of GSU.

Dr. Michael Zaffran of the World Health Organization (WHO) in a prerecorded message from Geneva recognized many contributions of local Rotarians to ending polio and presented a challenge for future building on this success. Dr. John Vertefeuille, the Polio Eradication Branch Chief of the CDC provided a status report on the global effort to end polio and talked about the interventions that are being undertaken to wipe out polio from the last reservoirs of the world. He also applauded Rotarians who volunteer so much time and efforts without any compensation, while folks like him are employees of the US Govt, and compensated through the public taxes. Dr. Carol Pandak of Rotary’s Polio Plus Program highlighted Rotary’s ongoing global efforts to eradicate polio. Julie Hackett of UNICEF’s Resource Mobilization and Advocacy team discussed the strategy and tactics that are used in Afghanistan and Pakistan to increase the number of children vaccinated against polio. Dr. Robert Linkins of the CDC discussed recent global measles outbreak and documenting how diseases such as polio that are close to eradication can quickly return if given the opportunity.

Acute Flaccid Myelitis (AFM), labelled “the new polio” in print and social media has gained prominence. Researcher and Director of the Division of Viral Diseases at the CDC, Dr. Mark Pallansch explained that AFM while having similar symptoms such as muscle weakness is “NOT POLIO”. AFM is believed to be a result of the respiratory virus Enterovirus D68 (EV-D68) although this mechanism is not totally understood as of date. AFM usually occurs in the fall and the CDC is asking parents and physicians to be vigilant for this disease. Dr. Pallansch also paid tribute to local Atlanta Rotary Clubs and District 6900 for their efforts in supporting the development of global laboratories that first support polio eradication but now provide detection for many diseases.

Dr. Scott H. Kozin, the Chief of Staff at the Shriner’s Hospital for Children in Philadelphia presented his work as a referral center for children with AFM. Dr. Kozin explained his experience and research with nerve transplantation and the success this treatment has brought to 35 children suffering from AFM. Explaining that in many in many cases that these children are fine one day and paralyzed the next. Dr. Kozin went on to summarize when nerve transplantation is successful and when it isn’t.

On behalf of the entire team from Emory-Clifton, support from D6900 and its clubs merits much appreciation and thanks. As the team leader or Quarter Back as Roger Wise defines it, it is most apropos to acknowledge this success for D6900 and they all made it happen. We truly are “SO CLOSE” to putting polio affliction and its ravages to the ashes of medical annals.